Why John Cornyn is 45’s perfect choice for FBI director 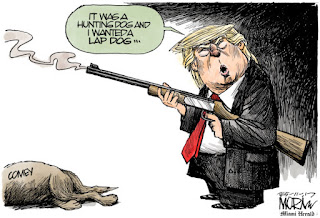 The New York Times reported Friday that John Cornyn was one of the four candidates under consideration to replace James Comey, the fired FBI director. Although the story indicted that the senior senator from Texas was happy to stay in the United States Senate, there is a strong argument that the Republicans would get a broader benefit from such a move compared to the other candidates.

First, make no mistake. Despite all precedent, the illegitimate president’s goal will be to make this a political appointment. It won’t be based on competence or understanding of law enforcement as much as the Cheato-in-Chief’s main criterion: loyalty. That will drive the new director to support and implement partisan approaches to the FBI’s tasks. And among those four, who better than someone who has placed party before country and campaign contributors before constituents? Cornyn.

Then, of course, since a good part of the term would remain, Greg “I-got-mine-now-screw-you” Abbott would get to appoint Cornyn’s replacement. And absolutely reeking of ambition, even though his intellectual reach far exceeds his grasp, Abbott would appoint himself. It makes sense because it sets up a straight line of Republicans of the same ilk — unprincipled right-wingers — from senator to governor, since Dan Patrick would move up one notch. Then, as I understand it, Patrick would appoint a replacement, although it’s a convoluted process. Anyone who believes any of the party-before-country corporatists would do otherwise is either naïve or hasn’t been paying attention.

And although there may be a few principled Republicans dotting the Texas landscape, they are as rare as an ivory-billed woodpecker. As the dominoes fall, so to speak, it is likely any appointments would reflect the current regressive and suppressive political climate in Texas. It will be a long time before it changes. Sad.
Posted by George Schwarz at 11:09 AM