A call to action - the first of a series 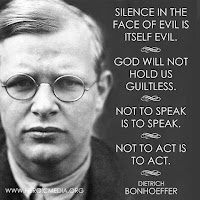 actions that counter those things we see as abominations.

Donald Trump is one of those abominations. So are Mike Pence, Steve Bannon, Steven Miller and Sebastian Gorka.

Call to action No. 1: My first call to action is to my journalism colleagues covering the White House, Trump and the administration. After watching parts of Trump’s Tuesday “news conference” at Trump Tower, I implore those assigned to the interactive mode with the administration to take a different approach.


Trump took control of the news conference and started asking questions of the reporters. At a minimum, I would have hoped one of those reporters had spoken up and said, “Mr. President, we’re here to ask the questions. You’re here as a public official, to answer them.”

To engage in the back and forth was to be pulled into his trap. When he spouts a lie, as he does so often, instead of trying to confront him or correct him at that point, let it go. Example: When he claimed the people resisting the KKK, Nazis and other white supremacists lacked a permit, don’t argue with him. Simply point out in the story that Trump lied. And, yes, I am asking you to use the word “lie” in your copy and stand-ups. For part of this call to action is to be clear and strong in our story telling and words like “falsehood,” “untruth” or any other milder work reduces the severity of what Trump is doing.

The other benefit of not engaging in debate and reporting the lies is that it puts the issue “on the record,” which we all want as journalists. And, by doing it this way, we do so with the signal, not the noise created by his back and forth.

Even this smallest step is one in the right direction. Those of you reporting for syndicates or cooperatives like the AP and Reuters, your words, if your editors are honest, will let those stories go forth reflecting the accuracy of the situation. As the thousands of open-minded consumers of news across the country read those words, they will begin to see the crisis in the United States as they should.
Posted by George Schwarz at 11:39 AM